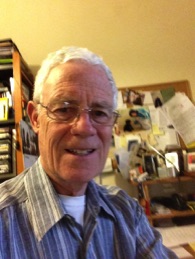 Henry Wingo in The Prince of Tides by Pat Conroy

My father drank his coffee black as he stood at the wheel of the boat and listened to the heavily accented voices of the other shrimp boat captains keeping each other company. His clothes smelled like shrimp and there was nothing that water and soap or my mother's hands could do to change that. When he worked hard , his smell would change, the sweat cutting into the odor of fish and becoming something different, something wonderful. Standing beside him as a small boy, I would pressmy nose against his shirt and he would smell like some rich, warm acre. If Henry Wingo had not been a violent man, I think he woud have been a splendid father.

He was an inch, perhaps two, under six feet, powerfully built, and headvanced straight at you with a slight stoop of the shoulders, head forward, and a fixed from-under stare w bull. His voice was deep, loud, and his manner displayed a kind of dogged self-assertion which had nothing aggressive in it. It seemed a necessity, and it was directed apparently as much at himself asat anybody else.hich made you think of a charging